The museum is honored to present components of the first ryūken, the original Dragon Sword. In 1880, Hidehiko Totani sacrificed himself by using the sword to defend Tokyo from a kaijū. A massive surge of electricity, enough to vaporize Totani and destroy most of the sword itself, was driven from a nearby hydroelectric power plant through the sword and into the creature, causing cardiac arrest.

The Ryūdō weapon system, of which the sword was a component, was created during the Meiji Restoration. European and American economic policies in East Asia increasingly threatened Japanese sovereignty. The Perry Expedition proved that the nation’s defenses were laughably weak due in no small part to two hundred and twenty years of cultural and technological isolationism. The feudal lord and scholar Shimazu Nariakira criticized Japan’s policy of national seclusion by warning that “[if] we take the initiative, we can dominate; if we do not, we will be dominated.”

In kaijū, the imperial leaders saw a convenient metaphor. Massive, destructive, and seemingly unstoppable, these creatures occupied a place of terror in the nation’s consciousness. But though they were familiar, they were not indigenous to Japan. Mastering Western technology to defeat this ancient foreign enemy, the government hoped, would cement the idea that modernization was not only wise but necessary. 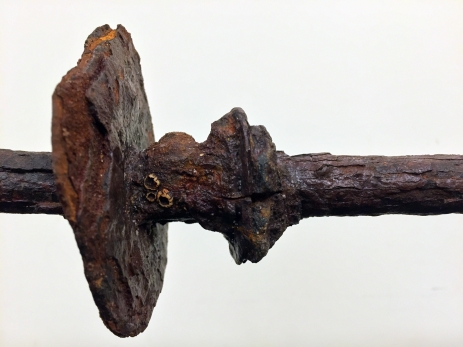 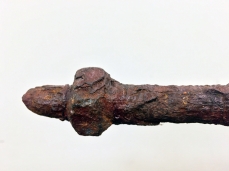 Recovered 32 years after the event itself, the sword lay wedged between rocky outcrops in the bay of Tokyo until it was spotted by curious children. Note the barnacle husks under the guard.

The sword’s design was influenced by this carefully controlled narrative. Records suggest the engineers of the Denki Kenkyūjo (Imperial Institute of Electricity) intended to build a trap, not a weapon. Soldiers were to lure the kaijū over electrified sand, a literal killing ground. But political leaders favored a device that could be held by a single person so that the nation could rally around a hero, someone who could model the kind of selfless bravery the empire wanted in its citizens. The project was even appropriately titled. “Ryū” translates to dragon. In Japanese lore, dragons are associated with rivers, strong winds, and storms, a short figurative leap to hydroelectric power.